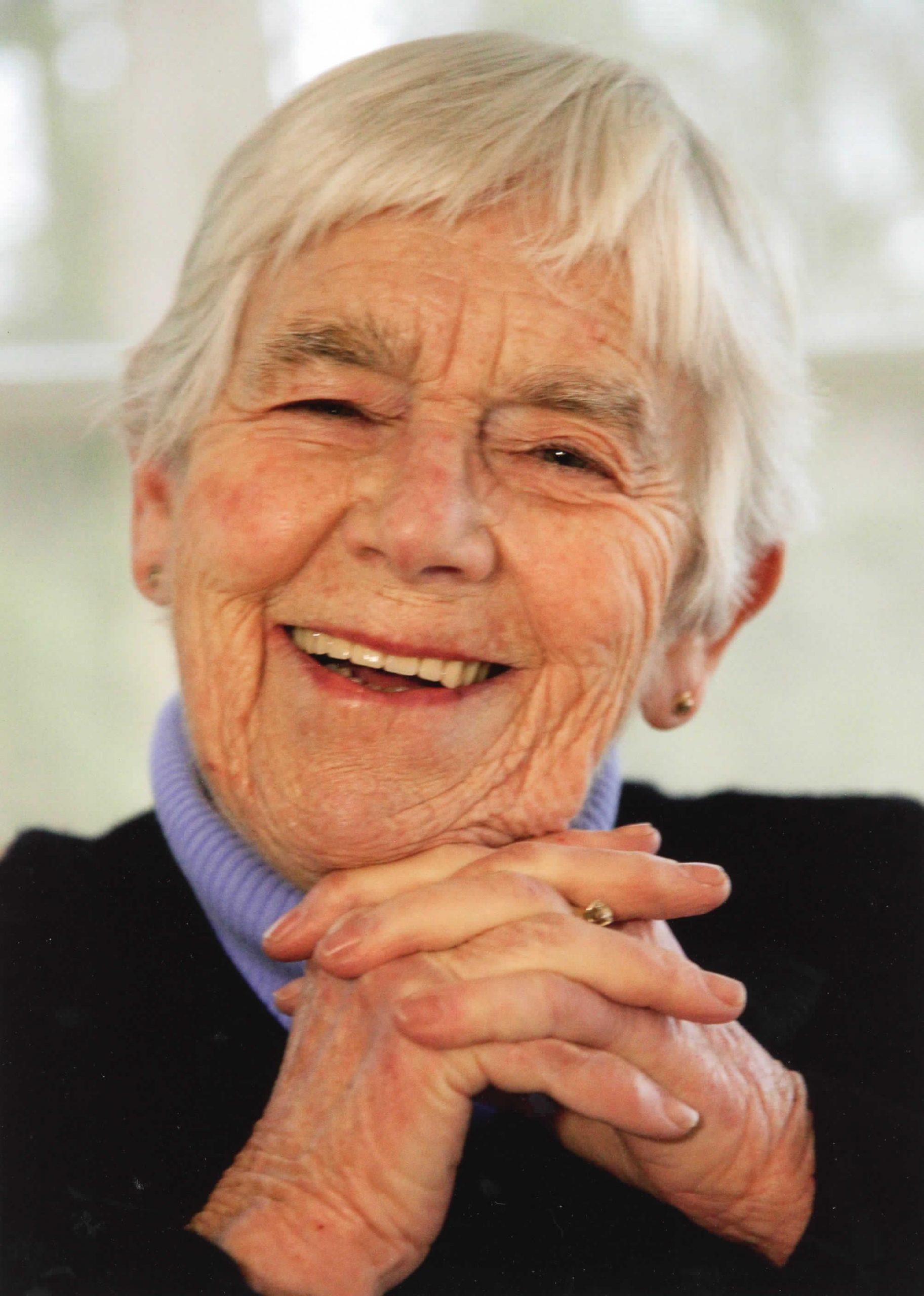 Barbara Ann Withers Goldberg, wife of Sol Goldberg, died April 29, 2020.
Barbara was born in Paterson, NJ on August 19, 1926 to Eleanor Flitcroft Withers and William
Louis Withers. Sol predeceased her on January 6, 2019. Survivors include their children,
Stephen, Susan Sherman (Russ, died 2014), and David (M.J. King); grandchildren Scott
(Kirsten Prevost), Matt (Laura Sherman), and Toni; and great-grandchildren, Gannon and
Lawson Sherman. Her sister, Ruth Heybrock, survives her as well as her favorite niece, Terri
Henderson; her cousins; and her remaining nieces and nephews and their families.
Barbara’s family left Paterson and built a house in Glen Rock, NJ when she was four. Known
as “Andy” by her childhood friends, she attended schools in Glen Rock and in Ridgewood,
then graduated from Randolph-Macon Women’s College in Lynchburg, Virginia with a degree
in sociology.
Barbara was a lifelong athlete, bike riding in her teens long distance around Bergen and
Passaic Counties, then between American Youth Hostels in New England earning money for
college. Earlier, she took horseback riding lessons where Route 208 is today.
Barbara was first introduced to hiking as a member of the Girl Scouts. Hiking became an
enduring passion. She was a long term member of the Appalachian Trail Club and last hiked at
the age of 90. She pursued gardening zealously throughout her life, surrounding their
successive homes with beauty. She was still gardening at 90, and swimming in the Glen Rock
Pool. Past activities included ice-skating, cross-country skiing and even occasional
snowshoeing, while later in life she took up yoga and Tai Chi to complement the hiking and
gardening. She was a bird watcher, loved the beach, and was always excited about all things in
the natural world.
Barbara grew up playing the piano and less so, the cello; loved to sing; and had a lifetime
interest in music, theatre and art. She and Sol shared these interests with their children with
frequent trips to the Museum of Modern Art or Metropolitan Museum of Art in NYC and the
occasional Broadway show, various other live performances including classical and jazz, and
the constant presence of WQXR radio playing in the kitchen.
She met Sol at a summer internship at the International Ladies’ Garment Workers’ Union.
They married Labor Day weekend, 1949, and remained devoted to each other throughout their
lives. They lived in NYC; Bristol, Tennessee; Roanoke, Virginia, and Newburgh, New York
before returning permanently to Glen Rock after the births of their children.
She was a stay-at-home mom with a busy social life and large garden, active in volunteer
commitments including serving as Sunday school director in the Unitarian Church in Newburgh
and in particular, participating in the League of Women Voters in Glen Rock and at the Unitarian
Society of Ridgewood.
Barbara returned to work once her children were older after earning a Masters in Library
Service from Rutgers. The MLS allowed her to express and more fully explore her lifetime
interest in children’s literature as well as qualify her for a very satisfying career at High
Mountain Road Elementary School in Franklin Lakes, NJ.

The Unitarian Society of Ridgewood was Barbara and Sol’s home and the springboard for many
of their volunteer activities, including for Barbara participation in after school and homework
assistance program C.A.M.P. in Paterson. Throughout her life, she was committed to political
activism and campaigned for, among other causes, peace, human rights, racial equality, prison
reform, early education, and the protection of the Earth.
Barbara and Sol liked to entertain and had an active social life. She was a natural hostess and
made everyone feel welcome. She was a long-standing member of the Women’s Group at USR
as well as the Society’s book groups. Books and reading were both Barbara and Sol’s passions
and her degree in librarianship was more a formal acknowledgment of what she already was
than a new achievement.
Along with Sol, she enjoyed traveling the world, visiting old friends and meeting new ones
through Elderhostel. Grandchildren were welcomed during the summertime to Camp Goldberg,
a blend of childcare for the working parents and cultural enrichment, outdoor fun and travel for
the kids.
Barbara became Sol’s caretaker in the last years of his life, with at-home help for a brief time
before they both moved to Arden Courts Memory Care in Wayne, NJ in May 2018. Alzheimer’s
made her a different but still loving person. The family is thankful to their friends who came to
visit while they were there, and grateful for the staff and administrators at Arden Courts.
Barbara’s cause of death was probable COVID, a worldwide pandemic that has taken so many
lives. In her memory, her children wish continued safety and health to her fellow human
beings, about whom she cared so much.
Donations in Barbara’s memory may be made to:
Alzheimer’s Association-https://act.alz.org
Unitarian Society of Ridgewood-https://onrealm.org/uuridgewood/give/now
Appalachian Trail Club-https://donate.appalachiantrail.org