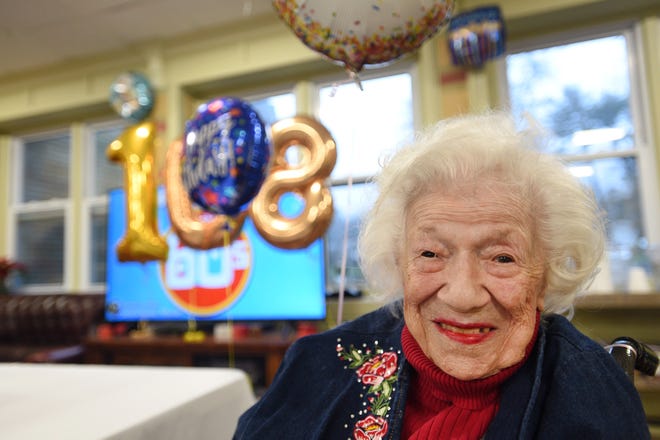 Sylvia Goldsholl lived through the Spanish flu, two world wars and the Great Depression, then beat the coronavirus at age 108 to become one of the world’s oldest COVID survivors.

Early Wednesday, just hours after turning 110, the resident of Allendale Senior Living succumbed to old age, dying peacefully before she could be properly feted by the mayor and the nursing facility staff, said David Gillies, director of activities.

“She was an in-house celebrity, a ‘big sister’ to many and a vocal advocate for others,” Gillies said. “An independent spirit who loved music, dancing and celebrating life with others.”

Goldsholl grabbed nationwide attention when she beat COVID-19 in April 2020 at age 108. Gov. Phil Murphy at the time hailed “a tremendous life, a tremendous spirit, a tremendous show of strength.”

“I know some readers may recall when she gained great press attention as the world’s second-oldest COVID survivor,” Gillies said Wednesday.

But to those who knew Goldsholl best, she was a devoted friend, a loving and involved aunt.

Goldsholl moved to the Allendale home in 2010 after spending most of her life in the Bronx, living in the apartment where she had grown up. She moved to New Jersey when she needed more care.

“I didn’t miss a thing,” she told NorthJersey.com after her bout with COVID. “I’ve done a very good job.”

Goldsholl in 2020 was a few months older than the 108-year-old New Mexico man who also beat the virus, but several years younger than a 113-year-old Spanish woman who survived it. In the time since, Lucile Randon, a French nun, survived the coronavirus at the remarkable age of 116.

Goldsholl was 6 when the Spanish flu tore through the United States and the world, killing an estimated 50 million people.

According to the Gerontology Research Group, which keeps a World Supercentenarian Rankings List that was last updated on Dec. 24, Goldsholl was briefly among the few validated supercentenarians alive. The term usually refers to people age 110 and older.

She supplanted Hilda Brown, who died in June and previously was the Garden State’s sole representative of the supercentenarian club.

Goldsholl embraced her status as a survivor in 2020, telling NorthJersey.com that her family “knew that I was a wonder. I met their expectations. I represented them in a very well way.”

All about family and education

Although she never married or had children of her own, Goldsholl cherished her family, her niece Nancy Chazen said in 2020.

“She always wanted to have family parties,” Chazen said. “She thought it was important to stay in touch with the family.”

Chazen remembers Goldsholl as “a very loving aunt” to nieces and nephews, and said she taught her to play cards.

At the Allendale center, Goldsholl enjoyed spending time with other residents and almost to her last day retained her zest for life.

“She has a reputation of being an advocate,” Chazen said, adding that Goldsholl used to write letters to government officials about the issues on her mind.

She was known to emphasize the importance of education, crediting her mother and father with encouraging her to learn.

“My mom was educated in Russia,” Goldsholl said. “She wanted very much to be knowledgeable. My father came from a very high-class background. I made the best of both [backgrounds].”

Gillies said that Goldsholl’s death on her birthday represents a good sign in Jewish tradition.

“A person who passes on their birthday is truly righteous,” Gillies said.

Matt Fagan is a local reporter for NorthJersey.com.

Services Will Be Private