Louis Suburban Chapel, Inc. was founded by George Louis, my father, on July 18,1953, in Paterson, NJ. The official name was George Louis Jewish Funeral Chapel and was located at 92 Prospect Street, Paterson, NJ. Before I continue, I feel it is significant to know about my father’s life as a person and as a funeral director. My father, George Louis was born on February 5, 1924, in Jersey City, NJ. His father died when my father was only 1 year old. My father and his mother, my grandmother then relocated and moved to Newark, NJ. My grandmother worked as a seamstress out of her apartment to support my father and herself. My father while attending school would help his mother when he returned home after school. 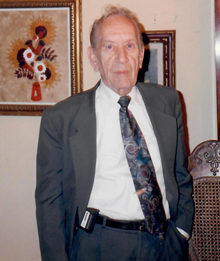 My father as described by Tom Brokaw, was part of the greatest generation. My father enlisted in the U.S. Army at the age of 20 and was a veteran of W.W. II . He served in the Pacific Theatre Of Operations in the Philippines in the Graves Registration Unit. After being honorably discharged from the Army, my father attended and graduated from the McAllister American Academy Mortuary School, in New York City. My father met and soon married my mother, Ruth (nee Goodman) Louis. My mother and father soon afterwards moved to a two family house in Paterson, NJ. They raised their four children which included my brother, myself, and my two sisters. As previously mentioned my father opened his first funeral home on Prospect Street, in Paterson, NJ.

In 1958 the City of Paterson, because of eminent domain, decided to make a municipal parking lot where my father’s funeral home was; because my father only rented and was not the owner of his funeral home, the city was not obligated to find another site with the legal zoning requirements. So needless to say, my father did not have a funeral home to conduct any funerals. One of my father’s best friends was Jack Feeney, who attended mortuary school with him. Jack’s family owned the Feeney Funeral Home, which was located at 385 Park Avenue, in Paterson and was the largest, modern and most beautiful funeral home in Paterson. My father asked if he could use their funeral home until he could find another location for his funeral home. The Feeney family said of course what ever you need.

After looking for and trying to secure another location to build a funeral home, the city of Paterson denied my father for almost two years the zoning approval needed. This was a very costly and extremely emotional period for my father. My father was very well liked and because of his sincerity and character many people still called him to conduct funerals out of Feeney’s. My father, whenever he had any free time had a habit of connecting with people he knew and did not know. My father would walk in the downtown Paterson business district where many Jewish merchants owned stores. While on one of his walks , my father runs in to a friend. This friend was William Furrey, who was the former Mayor of Paterson. Mayor Furrey considered my father like a surrogate son. He asked my father how he was doing and he told him of his problems with trying to get the zoning approval that was needed. Mayor Furrey said to my father, “why are you still using that same lawyer to get your zoning, you will never get a place zoned with that lawyer”. He then told my father to call a certain lawyer in Paterson who would later become a Superior Court Judge in Passaic County, and there would be no more problems. My mother who at the time was a licensed real estate agent found a potential location that she thought would be the perfect site to open the new funeral chapel. This property was located at 747 Market Street, on the corner of East 28th Street and 20th Avenue, in Paterson. This was a big old large brown shingled house with vacant land on the Market Street side and more vacant land in the back on 20th Avenue. In the back area of the property, there was even an old barn there.

The Market Street area was already zoned for a funeral home, however, the 20th Avenue area, with the barn, needed to get a zoning variance to make it into a parking lot. This new lawyer won the case with the Zoning Board. My father hired an architect and builder to construct his new funeral chapel. The new funeral home was built around the existing house where my family lived. My father named his new funeral home, Jewish Memorial Chapel, which officially opened on April 1, 1960.

My father saw the Jewish population moving out of Paterson in the 1960’s and had the foresight to open a new funeral chapel in Fair Lawn, NJ to better serve the Jewish Community of Northern New Jersey. My father named this new funeral chapel, Louis Suburban Chapel,Inc., which is located at 13-01 Broadway (Route 4 West) Fair Lawn, NJ. My memories of growing up and living over the funeral home in Paterson are very precious to me. I observed my father helping families at the worst times of their lives. My father treated every family the same whether they where poor, middle class, or wealthy and would help anyone in need without expecting anything in return. Even though my father worked day and night, he always found time to be a good husband and father. I would like to thank the Feeney family for helping my father during this difficult time.

Please forgive me, if the history of Louis Suburban Chapel, Inc. seemed like a filibuster in the United State Senate. You can blame me, Richard Louis, because my favorite subject in school was history. History can teach you not to make the same mistakes again.

I would just like to say a little bit about myself.

My name is Richard Louis, everyone that knows me calls me “Ricky”, except for my wife. As you may know, I was born in Newark, NJ and moved to Paterson as a child. I graduated Public School #20 and Eastside High School, both in Paterson. My family moved to Fair Lawn in 1969, where I still live with my wife and two children. I graduated Bergen Community College where I received an Associate Arts Degree and on March 9, 1973 I graduated from American Academy Of Mortuary Science School, in New York City, where I received my mortuary science degree.